Eyal Segal (b.1982) is an Israeli born artist with German and Indian (Cochin) roots.

His work interprets remembrance, tradition of the past and the possibility of self-understanding. The physical space is a central motif in his work and serves as a starting point for the self-interpretation. Past and present are connected in a concrete ‘locus’; this idea is continually interwoven in a powerful aesthetic viewpoint, matched with the perception of space through multi-channel videos. Presenting multiple video works in combination, he incorporates positional relationships in the exhibition space and creates the possibility of new interpretations. The keyword for Segal’s work is ‘place’. Here, memory, history, human activities and the traces of particular places are epically drawn on the screen. Furthermore, his video projects are composed and positioned such that they mutually influence each other, creating a sublimated site-specific installation in which the exhibition space itself forms an element of the work. His solid video images are as if three-dimensional objects, the body of the artist himself fill the space by placing heavy bronze sculptures - video as a sculpture of time and place.
​
During his studies at Shenkar College of Engineering and Design in Tel Aviv (2006-2010), he began working as assistant and studio director for the world-recognized artist Sigalit Landau, for a period of five years. In 2013, Segal exhibited his first solo exhibition in the Negev museum of art (Beer Sheva, Israel), and since then, he participated in numerous exhibitions in museums, art spaces and international art festivals all over the world; Kumho Museum of Art, Seoul, Pohang Museum of Steel Art in Pohang, South Korea. Cellule516, Marseilles, France. Ashdod Museum of art, Petah Tikva Museum of Art, Center for Persecuted Arts, Solingen, Germany, Arad Contemporary Art Center, Israel. Video Art Miden Festival & Videolands, Greece, MR.MOV2, Video Art Festival, Brescia, Italy, Videoholica video festival, Varna, Facade video festival, Plovdiv, Bulgaria, XOUTH festival, in Athens, Greece, Project space of Group Global 3000, Berlin, and more. In 2020, Awarded for 2nd best video art in ON ART, Poland - the biggest outdoor film festival in Europe. His second solo exhibition ‘Release: Return’ was held in FUGA center, Budapest, 2015. The next solo exhibition was in 2018 - 'GROUND LEVEL'- at the LOKO gallery in Tokyo. The exhibition also took a part in the 10th Yebisu International Festival for Art & Alternative Visions 2018. Tokyo, Japan.

In 2020 and 2021 during the covid-19 pandemic, Segal exhibited the solo exhibition 'LEVIATHAN' in Neve Schechter Gallery, and the video installation 'LINE IN THE SAND' in the LAB art space in Tel Aviv. 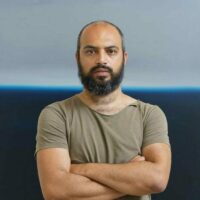