Israeli spinto-soprano Gal James has established herself in recent years on the European opera and concert stages as an artist of unusual sensitivity and great vocal beauty.

Recent operatic highlights include her debut at the Bregenzer Festspiele in the title role of Goldschmidt’s Beatrice Cenci, Agathe in Der Freischütz at the Grafenegg Festival, Rusalka at Semperoper Dresden, Rachel/La Juive at Opera Vlaanderen, Arabella for Theater St. Gallen and Mimi/La Bohème at the Palau de les Arts Valencia, under Riccardo Chailly (released on DVD), and at Opera Vlaanderen and Rusalka at Vienna State Opera.

In the 2020/21 season, Gal James will return to Oper Leipzig to reprise the roles of Mimi, Micaëla, Freia, Gutrune and sing 1. Dame in Die Zauberflöte. With the Noord Nederlands Orkest she will perform Gorecki’s Symphony no 3 and she is looking forward to returning to the Bregenzer Festspiele at the end of the season.

On the concert platform, Gal James has performed Mendelssohn’s Elias with the Berliner Philharmoniker, Strauss’ Vier letzte Lieder with LaVerdi in Milan, the Bochumer Symphoniker, the Oslo Philharmonic and the Netherlands Philharmonic Orchestra at the Concertgebouw Amsterdam, Rossini’s Petite messe solennelle at the Concertgebouw Amsterdam, Mendelssohn’s Psalm 42 with the Stavanger Symphony Orchestra, a selection of Strauss songs with the Grazer Philharmonisches Orchester at the Wiener Musikverein, Bernstein’s Jeremiah Symphony and Beethoven's Symphony no 9 with the Bochumer Symphoniker and the Stavanger Symphony Orchestra, Shostakovich’s Symphony no 14 with the Netherlands Chamber Orchestra and the Royal Liverpool Philharmonic Orchestra under Vasily Petrenko (both released on CD).

Ms James has won several awards, including third prize at the 2006 Belvedere Competition in Vienna, first prize in the 2005 Aviv Vocal competition, first prize at the Voice Competition of the Rubin Academy of Music at Tel-Aviv University, her alma mater. After graduating as a cello player, she studied voice, coached by Prof. Mira Zakai. She is a former member of the opera studio of the Staatsoper Berlin and continues to study with Patricia McCaffrey. 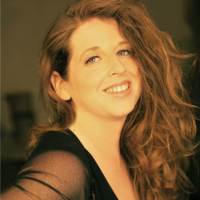