Born in Israel in 1977, Gideon is an active founder-member of the ‘Alfred Gallery’ , both as artist and curator. He studied visual art and film studies at the Beit-Berl College School of Arts (Hamidrasha) between 1999-2005 achieving merit award & scholarships in both departments. Since then, he has been exhibiting in art galleries and museums in Israel and works as an experimental filmmaking lecturer at Beit-Berl School of Arts alongside teaching art & film studies at Tel Aviv's museum workshops, working with underprivileged youth. He is currently concentrating his efforts on his studio work as a painter.


For his portrait and nude paintings, Gidi invites people to his studio and draws from observation. Interaction with the subject in front of him creates a dialogue of expressions, enhancing the ‘here and now’ of the moment of creation. He often multiplies one figure in a second and third figure in order to trace their minimal common denominator, which is not their specific appearance or another feature they share but rather the sense of intimacy that permeated the session of the painting which he attempts to capture and formulate in his work.

His work embodies an imagery poised on the verge of explicitness, and yet, like the contours of an unreachable horizon, avoids becoming set and stable. The figures are pensive, unraveling slowly and invite the viewers to enter a space which enables them to stop and become engrossed. The paintings are the product of familiarity and intimacy. They encompass the mutual emotional and personal component between him and his subject.

These works stem from classical sketching, draftsmanship and painting techniques, subverted by a series of thematic and physical diversions to arrive at the finished paintings. He often assumes rhetoric that he previously applied in his cinematic practice and which informs the way he constructs the arrangement of the picture in two-dimension and the medium of painting: thus, foci of light and darkness, a range of warm and cold or dark and bright colors, the movement of the lines that determine the structures, the use of transparent and opaque layers of paint.

In an additional series, he uses oils, charcoal and lacquers applied to industrial blank newspaper sheets to create lyrical visual expanses. In the history of each painting there is an abstraction of a landscape or the presence of implicit nude. Internal tension is created between the use of harsh expressive industrial materials and the soft brittleness the thin paper and image content.

His paintings aim to establish an intersection, where on the one hand his observation, dismantling, hesitation and inspiration is deposited to the canvas, while on the other side there is the viewer’s perspective, who is invited to take part in the process of weaving the experience of reality, putting it back together. 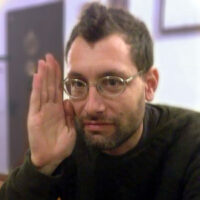