Until recently, Gilam exhibited under the pseudonym ‘Signor Gi’, and was active mostly in the public sphere. His work was led by a persistent
critical examination of the art scene in Israel and worldwide as well as an examination of the patterns of conduct and centers of power within the
artistic community. Today Gilam focuses on the combination of painting, video and instillation,
which he creates in his studio; A sort of research laboratory – a creative space
for experimentation and error. Gilam’s works deal with the tensions between the act of observing and the perception of reality in the world of painting: An archive of photographs collected from different sources, mostly from the internet, are used to created digital collages. Gilam recreates the image on canvas, and then transforms his paintings into three-dimensional installations. The new images are then added to his photo archive, becoming raw materials for future paintings. The transition between the different media
exposes the complexities involved in the modes of human vision.

Gidi Gilam (b. 1977), lives and works in Berlin. He holds a bachelor’s degree in history and philosophy from Tel Aviv University (2006), and a bachelor’s degree from the Visual Communications Department at Bezalel Academy of Arts and Design (2010). In 2006 he was awarded a D.A.A.D. scholarship from the German government, in 2010 was a recipient of the Feldheim Award for Excellence in Visual Communication, 2015 he was awarded Rabinovitch Grant and Mifaal HaPais in 2018. His final project was exhibited in the Design Museum Holon (2011), and his works are part of private collections (France, USA) and in the Jewish Museum Sao Paulo (Brazil). 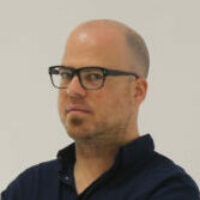