Israeli pianist, composer, vocalist and educator, Guy Mintus, is equally at home whether he’s sharing the stage with jazz legends, composes for classical orchestras, collaborates with masters of traditional music, working with kids or guesting as a soloist with Ska-Punk band Streetlight Manifesto with whom he performed at a sold out Beacon Theater. Coming from a mixed heritage of Iraqi, Moroccan & Polish Jews, his music is a meeting point between different rivers of inspiration flowing freely into each other. A trained concert pianist with the energy of a rock star and a jazz musician’s sense of adventure who’s unafraid to throw into the mix his native middle-eastern scales and rhythms.

Guy’s awards include the “Leonard Bernstein Award” by ASCAP and the Bernstein Family Foundation and the Prix du Public at the Montreux Jazz Festival’s solo piano competition.

His debut record, “A Home in Between” has been selected as DownBeat Magazine’s Editor’s Pick while a recent release, “Connecting the Dots”, has been celebrated in concerts throughout the US, Canada, France, Switzerland, Germany, Israel, Turkey and Kazakhstan including a New York CD release concert that has been recommended by the New York Times. Guy has performed/ composed works for Israel Chamber Orchestra, American Composers Orchestra, Jerusalem Symphony Orchestra, the Bavarian Philharmonic and for Miracle of Miracles, a new documentary about Fiddler on the Roof, by HBO director Max Lewkowicz. Guy is an endorsed artist by Yamaha Pianos. 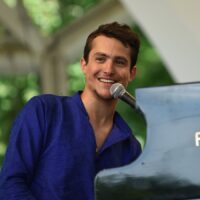