Hagai Haddad was born in Jerusalem in 1993. When he was 12, he started to play saxophone at the Municipal Music Center of Jerusalem. In 2006, at the age of 13, he was accepted to the “Jerusalem Academy of Music and Dance High School”, for Prof. Gersh Geller’s classic saxophone class. At the age of 14, Hagai started to learn composition at Irena Svetova’s class in the Jerusalem Conservatory. In 2008, Hagai won the second prize in the first National Saxophone Contest in Jerusalem.

During his time in high school (2010-2012), Hagai Participated as a saxophonist in several projects and ensembles, including The Jerusalem Saxophone Quartet, The Young Orchestra of the Israeli Philharmonic (summer 2010), and the world music ensemble of the accordionist Maestro Emil Aybinder. In the framework of the composition during high school, pieces which were written by Hagai were selected to be performed and recorded on several occasions, including concerts and festivals at the Music Center of Jerusalem and the Jerusalem Conservatory. In 2012, the Symphony Orchestra of The Jerusalem Academy High School played his Overture “Lord of the Flies” which he wrote for the Summer Music Festival of the high school. In 2011, Hagai was selected to receive extra conducting lessons with Dor. Yevgeny Tsirlin from his high school. He learned to conduct with him for one year. In 2012, Hagai was chosen by his school to receive a scholarship for his excellence in music achievements at the music studies at his school.

During this period, Hagai twice received scholarships from AICF: The first was in 2010 for winning the first prize at the “Young Composer Contest” of the foundation in collaboration with the Hinuchit TV, which had been broadcast in “Intermezzo with Arie Vardi” show in the same year. The second scholarship was received in classic saxophone for the years 2011-2012.

Hagai finished high school with the matriculation of 15 units in music: 5 in saxophone, 5 in composition, and 5 in theory and history.

At the age of 18, prior to his army enlistment, Hagai was designated by the army as an “excellent musician” and decided to turn down the designation in order to have a more significant military service. He was recruited to the Intelligence Force and served there between 2012-2017, as a soldier and an officer. In February 2017, Hagai was released from the army with the decision to return to music in general and composition in particular.

In October 2017, Hagai was accepted to the Jerusalem Academy of Music and Dance and started his BA degree in composition under the instruction of the composer Prof. Ari Ben Shabetai, who is his teacher until today.

In 2018, Hagai won an outstanding excellence scholarship in composition from AICF for years 2018-19. 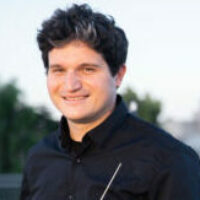