Winner of the American-Israeli culture foundation (2005-2016) and the Chais Family Foundation (2008-2009), Hila Ofek is an active solo and chamber music harpist, performing regularly in Israel and Europe.

Hila Ofek was Born in 1990 in Tel Aviv and received her initial music education in piano studies at the age of seven, at the Jerusalem Academy of music and dance conservatory where she later, at the age of eleven continued with harp studies at the harp class of Mrs. Gittit Boasson. In 2012, after graduating from the Jerusalem Academy of Music and dance she continued her studies with Prof. Germaine Lorenzini in Lyon, France.

In 2013 Hila became a member in Prof. Francoise Friedrich harp class at the University of Music and performing arts in Frankfurt am Main, Germany. There, in 2015 she successfully completed her Master degree. She is currently studying for the artistic diploma (Konzertexamen). 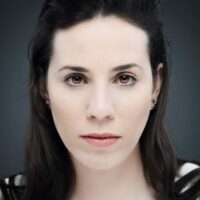