Born in 1977, Israeli pianist Iddo Bar-Shai trained at the Rubin Academy of Music (Tel-Aviv University) with Bracha Ornan-Margalit and then with Pnina Salzman – a former student of Alfred Cortot at the Ecole Normale de Musique and First Prize in the class of Magda Tagliaferro at the Conservatoire de Paris. He also benefited from the teaching of Alexis Weissenberg. Fellow of the America-Israel Cultural Foundation (1988-1999), he has been the winner of numerous national and international competitions.

He is now pursuing his international career in Europe, Asia, Brazil and the United States, in particular on the prestigious stages of the Wigmore Hall (London), the Théâtre des Champs-Elysées (Paris), the Opera City Hall (Tokyo), Beijing Zhongshan Hall and Fredric R. Mann Auditorium (Tel Aviv).

Partner in chamber music of the Ysaÿe, Aviv, Ebène, Modigliani or American String Quartets, he has been playing with orchestra since the age of twelve, among others with the English Chamber Orchestra, the Philharmonic Orchestra, Israel, the Lille National Orchestra, the Paris Chamber Orchestra, under the direction of Aldo Ceccato, Eliahu Inbal, Sir Lawrence Foster, Jesus Lopez-Cobos, Kaspar Zehnder, Günter Pichler.

Invited by Martha Argerich as part of the Martha Argerich Project in Lugano, Iddo Bar-Shai has been playing every year at the Roque d’Anthéron Festival since 2004. He participated in the Festival and the Verbier Academy, on the Steans Institute program. of the Ravinia Festival (USA), the Meslay Barn Festival, the Menton Festival, the Radio France Music Festival in Montpellier, the international chamber music festival in Jerusalem (in Berlin and Jerusalem) as well as than at the Festival de la Folle Journée in Nantes, Lisbon, Tokyo, Warsaw and Rio de Janeiro.

Iddo Bar-Shaï was selected by “Dominicans of Haute-Alsace” as artist-in-residence during the 2014-15 and 2015-16 seasons. In this context, he collaborated with the ombromane Philippe Beau to the project “The Wandering Shadows” with keyboard works by François Couperin. This show has been acclaimed by the press and a world tour is planned.

His concerts have been recorded and broadcast by several European, American and Israeli radio stations. Several concerts have been broadcast on the television channels Mezzo, Arte and NHK. It also appears on the DVD “The Pianos of Tomorrow” (Naïve / Ideal Audience) with the cooperation of channels ARTE and France-3.

His Haydn piano CD, released in 2006 under the Mirare label, won praise from the press. With “5 tuning forks” from Diapason magazine, it has been described as “one of the best recordings ever devoted to Haydn’s piano work” by the World of Music and, by the magazine Piano International, as “an extraordinary record; the acquisition of this CD is de rigueur for all lovers of classical repertoire “and also” This superb recital announces the arrival of a talented pianist who joins his elders, Curzon and Larrocha in Andante, Brendel and Gould for sonatas “by Classica Répertoire. This CD has also been selected and awarded by numerous magazines and radio stations, notably by the magazine International Piano, which has chosen it among the three CDs to receive the “rising star prize for a first recording” as part of the Prize International Piano Festival 2006. In December 2008 his last Chopin mazurkas CD was released by Mirare. He has received unanimous praise in the world with the highest ratings from prestigious newspapers such as Le Figaro and Fonoforum in Germany and has been described as a “magnificent achievement; and confirmation of a new great talent for the current keyboard “(online magazine Classic-news) and” A singular and major record “(Le Devoir). His latest CD released in 2013, entirely devoted to François Couperin’s works, was judged as “a Couperin record as fascinating as the Goldberg Variations by Glenn Gould.”

Opus HD magazine, and “a record that attracts, demonstrating that Couperin’s works are as viable on modern piano, and where Bar Shai does a splendid job. You can not go wrong with such an interpretation, finely nuanced and expressive. Fanfare magazine. 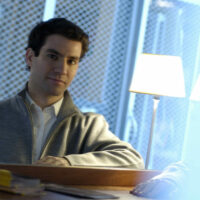