Ido Azrad was born in Jerusalem in 1986. He acquired his third degree (solo class) in clarinet at the Trossingen Music school,Germany, under Prof. Chen Halevi. He completed two Master degrees for modern clarinet and historical clarinet in Trossingen and his Bachelor’s degree at the Jerusalem Academy of Music.

Over the past several years he has studied with Prof. Wolfgang Meyer,Ernst Schlader, Dudu Carmel, Ilia Schwartz and Ilan Schul.

Ido has been a recipient of the America Israel Cultural Foundation scholarships in clarinet and chamber music from 2004-2011. In 2010-2011 he was a recipient of Baden Württemberg foundation.

He won the Trossingen Music Academy competition, as well as the “Paul Ben Haim” competition (Israel) and first prizes at the Jerusalem Academy of music Competition.

Ido has played as a soloist with “the Tel Aviv Soloists”, the Jerusalem Symphony Orchestra, The Be’er Sheva symphony orchestra, The Trossingen Music Academy Orchestra (Germany), The Sinfonietta for Modern Music, Trossingen and The Jerusalem Academy Orchestra. He has played recitals in Europe, Canada and Israel, and recorded for the radio and television in Austria, Germany and Israel. In 2012 he played a world premiere of a duo for two clarinets by Philippe Hersant with the clarinetist Chen Halevi.

Ido is frequently invited to play with various orchestras including the Israel Camerata Jerusalem, the Jerusalem Symphony Orchestra and the Tel Aviv Soloists, and is a founding member of the Tutzfrequenz ensemble, a unique ensemble combining modern and historical instruments.

Ido is currently a clarinet teacher and the acting director of the conservatory of the Jerusalem academy of music and dance. 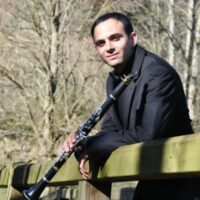