Ilia Skibinsky is an international composer, multi instrumentalist and producer operating in a variety of musical styles.


Ilia was born in Russia and immigrated with his family to Israel in 1993. In 2007, he relocated to New York following an invitation to attend the New School University on several scholarships. He is currently based in Berlin, Germany.

Upon graduation, Ilia took an active part in New York's vibrant music scene. A culmination of his musical endeavors was the recording of his debut record The Passage, which has been released on David Binney's Mythology Records in 2013. The record has been named as the top 10 albums of the year by Jazziz Magazine, alongside such artists as Al Di Meola and John Abercrombie (among others).

As a performer, Ilia's credits include:
A 15-month worldwide tour with Cirque Du Soleil's production "Corteo"; Several Off-Broadway Musicals; various TV shows, such as the spin-offs of "American Idol" and "Dancing with Stars" as well as a multitude of festivals and venues all around the world. A partial list of artists, with whom Ilia has collaborated includes Randy Brecker, Joanne Brackeen (Jazz Messengers), Grammy award winner David Sanchez, multiple Grammy nominee Bobby Sanabria, electric bass legend Larry Graham, Arkady Shilkloper, Mike Moreno, Rodney Green and many others. As a session saxophonist, he can be heard on hundreds of recordings in a multitude of styles and mediums.

In January 2015, Ilia has been awarded the first prize in the international Made in NY Jazz Competition as a member of a collaborative international project recorded and performed entirely online.

While not performing, Ilia spends his time composing for various mediums. In August 2018, his original orchestral score "The Road" has received the 2nd prize Award in the 2 Agosto international composition competition (Bologna, Italy), followed by an earlier Special Jury Mention award he received for another score in August 2016.

Ilia's works for TV can be heard in a variety of shows such as: Forged in Fire (History), Real World Road Rules Challenge, 2015 NFL Football (NFL Network), Married to Medicine (Bravo), Too Cute (Animal Planet), Say Yes to the Dress (TLC), Real Housewives of Miami, Southern Charm, Dirty Money, Being Liverpool, Pawn Stars and others...
In 2015, Ilia has co-written and recorded saxophone for the soundtrack of "Kung Fury", a short movie that has become a youtube sensation building a cult following and over 32 Million views (as of March 2019). He also worked as a composer on several independent films as well as a producer for various singers/songwriters. 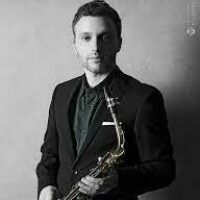