Subliminal (Kobi Shimony) was born in 1979 in Tel-Aviv, Israel. He began creating music at the age of 12, recording his work under bootstrapped conditions. He performed in Reggae clubs as a teenager and was the first Israeli pioneer of Hip-Hop music, bringing the genre to Israel’s party scene. At the age of 17, Subliminal released his first Independent Hebrew project, “Restless Israelis”. Undeterred by surrounding doubts regarding Hebrew language rap, he formed “TACT (Tel Aviv City Team) RECORDS”, the first Israeli record company that made the dream of Hebrew Hip-Hop come true.

Three years later he completed his army service and got back to work Subliminal’s first official album “The Light from Zion” produced by TACT Records” and distributed by Helicon Music (Israel’s biggest major), hit the stores on year 2000.

In2002, Subliminal produced a second album, “The Light and the Shadow”, with co-creator, The Shadow (Yoav Eliassi). The album sold Triple Platinum, making it the best-selling Hip Hop album in Israel of all time. “Subliminal and The Shadow” became a huge phenomenon which took Israel by storm. In the following years, Subliminal and The Shadow won several awards in Israel and abroad, including the European Hip-Hop Achievement Award.

Subliminal released an impressive album in 2006 called: “Just When You Thought It Was All Over”. In this album Subliminal is already in the center of the Israeli mainstream, featuring Shlomi Shabat, David Daor, David Broza and of course TACT Records Artists. This time first class artists from the US came to pay their respects to the Israeli Hip-Hop King. Artists like Wyclef Jean, Miri Ben Ari, Joe Buddens and more.

In 2007 Subliminal collaborated with Grammy award winner Hip-Hop violinist, Miri Ben Ari, to write a touching song that deals with commemorating the Holocaust, titled: “God all mighty when will it end”, in response to the youth’s ignorance on the subject. They performed the song together on the Holocaust Memorial Day ceremony in Yad Vashem to a crowd of Holocaust survivors and youth from abroad in an event defined by the Yad Vashem President as “Change of History’s Wing Span”.

In June, 2010 Subliminal married his high school sweetheart, Ines. In January 2012, the couple had their first son, Or (“Light”), to whom he dedicated his 2012 double album of 40 Number One Hits, “My Creation”, whose broad appeal has reached a huge fan base across Israeli society and beyond. “Hit Machine”, Subliminal reached every home and family in Israel, young people and adults, children and their parents, Jewish communities and Israelis, as well as hip-hop lovers around the world.

These days Kobi Shimony/Subliminal is finishing his first international English Album titled: “Alien”, hopefully to be release later on this year. 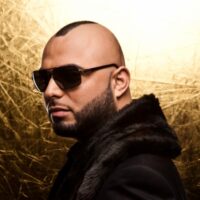