Lilach Dekel-Avneri is An Israeli theatre director, curator, translator and dramaturge.
Recipient of the prestigious Rosenblum Prize for the Performing Arts, and the Israel Institute Visiting Artist program.
Founder and artistic director of the award-winning theatre company Pathos-Mathos.

Lilach directed multiple award-winning theatre and performance shows, in Israel and overseas.
Her works are often described as "A theatrical event or a piece of art with poetic and surreal qualities that offer a real alternative to the conventional theatre".

Among the Site-Specific Events: She will find solace, Chamber of Chambers, Lost Paradise. Among the plays she directed are productions such as: Amsterdam, Muranooo, Adam Geist, Someone is Going to Come, Macbeth, Phaedra's Love and more
Her last work Crowned – a performative video and audio installation, premiered at the Acco Festival for Alternative Theatre 2021, won a special citation "for braking the boundaries of the Theater medium".

Since the first lockdown, Lilach directed 5 productions via, or for, the web:
1. The Artists’ Room. A Showroom - an internet project for the Days of Corona, premiered in March 2020. HEARA 13 Festival.
2. Sheltered Housing - an internet project for the Days of Corona, premiered in April 2020. Viral Festival.
3. She will find solace - a site specific performance at the Voznesensky Museum, Moscow, Russia - directed via Zoom, premiered in September 2020. The Golden Mask Festival.
4. The Eichmann Project - Terminal 1 - a performance for the camera revisiting one of the seminal events in the history of Israel – the Eichmann trial, premiered in September 2020. The Israel Festival.
Best performance for the digital 2021, The Golden Hedgehog.
5. 86 - as part of: “Hektomeron” – an international project after Boccaccio’s Decameron, premiered in Feb 2021. Marin Sorescu National Theater, Craiova, Romania.

Lilach served as the artistic director of several festivals is Israel, among them: "International Exposure", "Mi-darom", "The German season", "Shakespeare unplugged", "Bio-Feedback", attended many theater festivals around the world and was the chairman of the jury in BITEF 2014.

Lilach published articles about theatre in various journals, translated plays, co-edited The Anthology for German Plays of the 21st Century, escorted artists as a dramaturg and enjoys mentoring upcoming directors and playwrights. 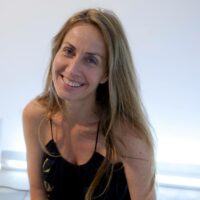