Education: M.A in Education and Art

Almandine – A deep purplish red, naturally occurring gemstone which serves as the basis of my work and my personal philosophy. The personal significance of this stone has carried me through the hardships in my life. The stones are the building blocks of my personality as well as my paintings.
As a child from an economically impoverished family, I used to play in vast fields outside my house. Little stones similar to Almandine were my toys. They formed my first pleasant memories, they were the characters who painted my imagination, who told me stories, and in the unpredictable condition of my early life, I had them always. Today, I portray these stones as the basic elements comprising the images on my canvas, which are the emotional recollections of my life's events.

My artistic creations harbor multiple dynamic layers which I embrace. For example, in addition to the representation of the almandine stones as a beaded string which illuminates the figures in my paintings, I also view my creations as woven quilts. As so, my paintings are influenced by my father's profession in Yemen as a tailor to the king. The intricate and colorful detail is an interpretive representation of the Jewish-Yemeni quilting work that my father had toiled over in his boyhood. The patterns intertwine to stitch together the human experience that I felt as a young girl, that my father had felt as a boy, and that the viewer feels as he identifies with these emotions. 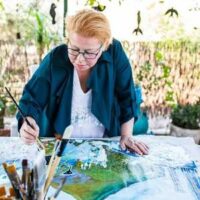