Matan Ben-Tolila was born in 1978 in Israel, where he currently lives and works.

The work of Matan Ben-Tolila focuses on large-scale landscape paintings. His paintings linger on moments in which reality and abstraction co-exist. The scenery appearing in Ben-Tolila's paintings contains temporary structures of different kind and function, these are constructed with simple, almost schematic elements.

The work of Matan Ben-Tolila has been displayed in solo and group exhibitions:

Ben-Tolila has been awarded the Schir [email protected] grant, Friederike Schir foundation, in June-August 2014; Excellence in Painting in 2006 by the Fine Art department, Bezalel Academy of Art Design, Jerusalem, as well as the Excellence of the America-Israel Cultural Foundation award in 2005, 2006, and 2007. 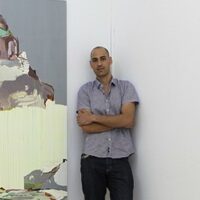