Moshe Aron Epstein shares a solo and chamber music career with a position of professor for flute at the Hochschule (Academy) of Music and Theater in Hamburg, which he holds since 1999. As soloist he has performed with major Israeli Orchestras and a plenty others, e.g. Berlin Symphony, Ljubljana Radio Orchestra, Shanghai Philharmony, Chamber orchestras of Frankfurt and Hamburg and more. He has been invited to play for the music festivals of Bregenz and Hopfgarten in Austria, “Bach a Bartok” – Italy, Kfar-Blum and Eilat – Israel, Festspiele of Berlin, Mozart Festspiele in Schwetzingen, Schloss-Kirche Concerts in Mannheim and for the festivals of the English, Slovenian, Polish, German and American Flute Societies.

The master-classes with Mr. Epstein are internationally sought after and are located world wide, including the USA, Japan, Germany, China, France, England, Finland, Slovenia, Moldavia, Italy, Hungary, Estonia and Israel.

In 2002 he established the Trio Gabriel with Bettina Pahn – soprano and Wolfgang Zerer – organ/ harpsichord. A CD of the Trio, “Sweet Silence” containing arias and sonatas of the Barock appeared in 2006 (“ambitus” amb 96 902).

“Mind your Fingers” – his advanced practice book for flute has been published by Zimmermann Edition in March 1999. A version for the oboe appeared in 2005. His next book “Mind your Sound” will be pulished in 2014.

After winning 1st. prize in the flute competition of the Music Academy in Tel-Aviv Mr. Epstein studied in Switzerland with Marcel Moyse, and later, as guest of the Artist-Home Boswil with Aurèle Nicolet.

Upon returning to Israel in 1981 he became principal flautist of the Israel Sinfonietta, with which he frequently appeared as soloist in numerous subscription concerts and in the Israel Festival. Tours in Germany, Belgium, Switzerland, Spain and France followed thereafter.

At the same year Prof. Epstein Joined the Jerusalem Academy of Music and Dance and served as head of its wind department, chair of the Orchestra Instrument Department and dean of the Faculty of Performing Arts. He also was music director and conductor of the Academy’s chamber orchestra (1996-1999).

1992 – 1995 he directed and narrated the Chamber Music Series at the Auditorium of the Ted and Lin Arison Israel Music Conservatory in Tel-Aviv.

Since 2006 Prof. Moshe A. Epstein cooperates with the association “MAESTRO MUSIC – caring for Israel through Music and Musicians”. 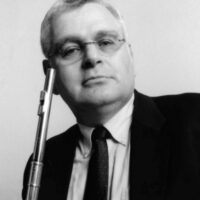