Nitzan was born on in 1998 in Jerusalem, now he lives in Modi’in. He was raised in a musical family, his brother and his dad are musicians to. He started playing drums at the age of three just for fun and at the age of nine he started playing guitar. At the age of six he moved with his family to Modi’in and began to study music in third grade at the Democratic school in Modi’in under the guidance of Shahar Galina. At the age of 11 he started to learn guitar in an orderly manner in Modi’in, and at the age of 12, he discovered the world of jazz and began to work with and learn from jazz. These days he is playing in jazz concerts and perform with many artists that are influenced by jazz music, even if the style is different.

Nitzan did a show in the Red Sea Jazz Festival in winter of 2016 with the pianist Ruslan Sirota, grammy award winner. In the show also took part the great Gilad Abro on the drums and Amir Bresler on the drums.

After that, He joined Daniel Zamir’s band and did a couple of shows with them, 2 of the shows was in Romania in different festivals. He did a band show and a Duo show for a while with Daniel. At the same time he joined the flute player Mattan Klein and his band, and they are still performing and active these days of 2017.

After he graduated, he joined to the Orchestra of Avi Leibovich and did common projects with some of the best Israeli musicians today such as Alon Eder, Ester Rada, Efraim Shamir, Shem Tov Levi, Yossi Fine and many more. At the summer of 2017, he recorded his first album, with original Jazz tunes, songs and concept tunes of his. The Album is supposed to be out independently in 2018.

In July 2014 Nitzan got in to a world Jazz Guitar competition in Montreux that in Switzerland under the “Montreux Jazz Festival”. Competition that received only 10 guitarists all over the world, and he was one of them. since 2014, he received the AICF grant, which allowed him to continue his studies as he planned, and he will always be thankful for that. 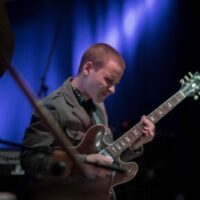