Fort has sang and played the piano from an early age; she started taking classical piano classes at age 5 and cannot remember a time when she did not sing. However, her life journey took her to other places, researching birds migration in the Israeli desert as well as working in the nonprofit world. It wasn’t until she travelled to India for a year, learning the tabla and playing with traveling musicians like her, that she decided to go back to music and pursue this passion professionally. Upon her return to Israel she enrolled in the Jerusalem Academy of Music and Dance, started performing with various bands and projects and quickly gained a name as a versatile pianist/keyboardist/vocalist.

Since her arrival in New York in 2013, she has played in numerous venues and festivals such as The BRIC Jazz Festival, Dizzy’s Club Coca Cola at the Lincoln Center, The Stone, Cornelia Street Café, Roulette, Rockwood Music Hall. She has played and collaborated and played with Jazz greats in NYC and around the world. In 2015 she formed a trio which later became the Noa Fort Quartet, comprised of Fort (piano and voice), Josh Deutsch (trumpet), Dan Loomis (bass) and Ronen Itzik (drums). Together they developed a unique, cohesive, exploratory and fresh sound.

In January 2018 Fort has self released her debut album as a bandleader and composer, ‘No World Between Us’. The album immediately gained critical acclaim. All About Jazz called it “an album of comforting originality on all fronts...lyrics brimming with timeless themes” and it was described as “vocal jazz that offers a profound experience for the listener...breathtaking listen” by Staccatofy. Fort also holds an MA in music therapy from NYU; she uses music in her work with youth at risk, adults with developmental disabilities and people who suffer from mental illnesses and believes in the power of music to heal. 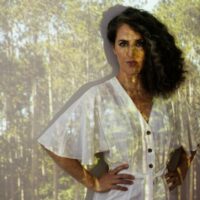