Omer Itzhak Posti was born and raised in Israel, and now he’s starting his 2nd year in Conservatoire National Superior de Musique et Danse de Paris (CNSMDP)
Omer has begun his musical studies when he was 6 on soprano recorder. two years later he started oboe studies in the Israeli Conservatory in Tel-Aviv in the Class of Ms. Yael Zamir.

during his studies in Arts High-School “Thelma Yellin” Omer has begun his studies in the class of mr. Dudu Carmel, and the year after graduating school continued his studies with mr. Carmel for another year in the Buchman-Mehta School of Music (BMSOM).

As part of his development as orchestral player, Omer participates in Auditions for principal jobs in respected orchestras such as The Israel Philharmonic and Orchestre de Paris, and getting to advanced stages of those auditions.

Omer played as soloist with Israelis orchestras such as Israeli Philharmonic Orchestra, “Thelma Yellin” Symphonic Orchestra, and the Israeli Chamber Orchestra.
Omer often plays Chamber Music, and in the last summer Omer was an artist in the Galil music festival “Kfar Blum”, and played Chamber Music with the best of the Israeli musicians such as Tibi Cziger, Mor Biron, Chezy Nir, Gili Schwarzman, Miri Yampolsky, Menachem Wissenberg, and more.

Omer Has received excellence scholarship from the AICF for more then 5 years.
In addition, Omer Has Received scholarship from the israeli Philharmonic Orchestra “Clef” program for his 6 first years of oboe studies, scholarship after Dalia Maroz, and from the Ronen Foundation. In addition, Omer Won Prizes in The Paul-Ben-Haim Competition, the Winds-Percussion-Harp competition of the BMSOM, and honorary mention for the Chamber music competition of the BMSOM with his wind quintet. 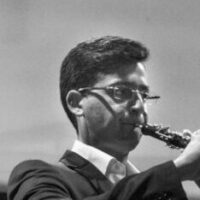