Born in Jerusalem, Israel, Ronen was fortunate to grow up in an environment that fostered his dreams of becoming a musician. He was raised in a music-loving family; both his parents and his older brother were music enthusiasts who enjoyed a large variety of music. Music was therefore a part of every day life, and Ronen’s up-bringing gave him many opportunities to cultivate his love for the art form.

At the age of six, Ronen took keyboard lessons for a year. This served as a great introduction to instrumental music and, later, helped him realize his interest in playing music professionally. At age fourteen, Ronen joined a band as a drummer and began to take drum lessons. Ronen's tastes expanded into the jazz world as he advanced further into his teens, and he continued playing in different bands. His talents allowed him to perform in many diverse venues in Israel. From early on in his musical endeavors, Ronen collaborated with renowned Israeli musicians, as well as guest artists from around the world. His experiences gave him a true international sensibility.

Ronen’s growing interest in music made him decide to pursue a career in music. In 1999, he joined Rimon School of Music, in Ramat Hasharon, Israel, where he began his path in higher education. Two years later he decided to relocate to the United States to further his education. He pursued his undergraduate degree at the renowned Berklee College of Music in Boston, which he attended on a scholarship. In 2003, he graduated Suma Cum Laude and received his Bachelor of Music in Performance. Following graduation, he transitioned to Florida State University College of Music and obtained a Master of Music degree. As a scholarship recipient, Ronen gained college-teaching experience through a graduate teaching assistantship.

After navigating the academic world of music, Ronen moved to New York City in order to pursue a career as a performer and composer. In 2005, Ronen began recording and performing with numerous artists and groups, covering many different styles, and has fit seamlessly into every role he has taken.

He has been mentioned in publications, including NPR, The New York Times, JAZZIZ, Jazz Improv, WBGO, All About Jazz, New York City Jazz Record, and About.com, as well as in the Israeli publications Maariv, Yediot, Haaretz and Jerusalem Post. 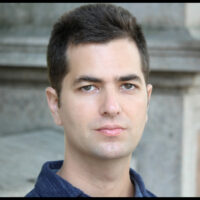