Shalev Ad-El was born in Ramat Gan, Israel in 1968. As a recipient of the AICF scholarships, he graduated from the Royal Conservatory of The Hague and won the first prize at the Francois Shapira Competition in 1987.
​
As a soloist, he has played with most of the leading orchestras in Israel including the Israeli Philharmonic Orchestra.

Both as conductor and harpsichordist he frequents some of the world's most prestigious venues such as Wigmore Hall of London, Carnegie Hall, the 92Y and the Frick Collection of NY, Suntory Hall of Tokyo, Brugge festival, Bachfest of Leipzig, Bozar of Brussels, LG center of Seoul, Handelfestspiele of Halle, Goettingen Handel Festival, Utrecht Festival etc.
​
Ad-El is a member of Il Gardellino and The Dorian Consort, Berlin Philharmonic Stradivarius Soloists, and the music director of Accademia Daniel and Oslo Baroque Soloists.

In 2008 he was awarded the German FASCHPREIS for his lifelong contribution to reviving central-german music. 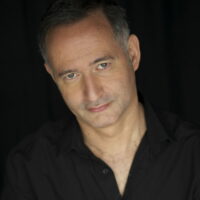