Shy Abady is an Israeli artist (born in 1965 in Jerusalem). Over the years, Abady created "biographical" series, which followed individual figures (including, Nijinsky, Hannah Arendt and Radu Klapper, Paul Celan).Other series addressed historical-political themes (Including, "My Other Germany", "Augusta Victoria", "Back to the Levant").In some other series, (" Icon – the Golden Age", "The Return of Desire"), Abady examines the language of art itself and the aesthetic influences and relationships between Western-Christian art and Jewish-Israeli art. Abady's work has been shown in solo and group exhibitions in many galleries and museums in Israel and abroad.

Israeli Lottery, support in producing the catalogue for the series Radu 2011

2000 Residency in the Cite des Arts, Paris, scholarship from the Israeli Municipality of Art and Cultur 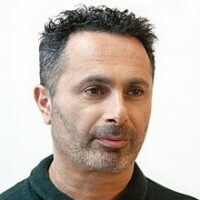