Her creative work is marked and affected by being an immigrant who has been uprooted from one country (Brazil) to another (Israel). As a multi-disciplinary artist, she mainly paints and creates object and installations. Her objects are built from readymade material and mainly she prefers to use materials that are meant to be recycled, just before they become unwanted, or thrown in the garbage.

While trying to accommodate herself to a new place, a new language, and a new culture, she founds herself attracted by certain species of trees which seemed to her alien to this new landscape, mainly tropical palm trees and Eucalyptuses. These trees were imported from other places for different reasons: the palm trees were meant to decorate and enrich Israeli gardens, and the Bauhaus buildings that populate beautifully wildly the city of Tel Aviv.

Alongside this cultivated nature, she focuses also on urbanism. Her works have a dual existence: from one hand they manifest reductive formal structures and colors and on the other hand, the works have a conceptual statement that has to do with contemporary urban culture metaphors. 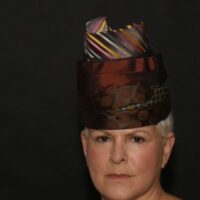