Born 1981 in Tel Aviv, Israel, AICF scholarship award winner (2000/01, 01/02, 02/03) Tal Ronen is an accomplished young bass player living and working in New York City. As a highly sought-after sideman, Tal has been a frequent band member with many notable musicians such as Frank Wess (Sax.), Jimmy Cobb (Drums), Harry Whitaker (Piano), Shiela Jordan (Vocals), and many more. Ronen is currently the bassist for acclaimed Grammy winning international artist Catherine Russell. He also leads his own group featuring his own original compositions, as well as being a main collaborator and songwriter for up and coming artist Dida Pelled.

Ronen has played at many prominent New York venues, most notably Jazz at Lincoln Center, Village Vanguard, Iridium, the Kitano, Smalls and Mezzrow.
Ronen is a frequent presence on the world stage, participating in various international festivals around the world including the Sibiu Jazz Festival (Romania), the Gyor International Art Festival (Hungary), Jazz-en-Tete in Clairmont-Ferrand (France) and many other acclaimed venues, such as the North Sea Jazz Club in Amsterdam and Sunset Jazz Club in Paris. In Israel, he has been a frequent participant of local jazz festivals such as the international Red Sea Jazz Festival in Eilat, the Israel Festival in Jerusalem, the Tel-Aviv Jazz festival, the Haifa Jazz festival and others.

His style has been described as “swinging and lyrical… I was delighted by the big warm sound he got… His pulse was absolutely right, although never obtrusive, and his solo lines were worthy of being transcribed” (Michael Steinman, Jazz Lives) “Easily one of the best bassists of his generation… a truly gifted accompanist… with exuberant, swinging solos” (Daniel Healy, Arts America Blog).

In his mid-teens, the great jazz educator Arnie Lawrence took Ronen under his wing as a protege, recognizing talent and promise in the young artist.
Ronen graduated from the prestigious art high school Thelma Yellin in Israel, and served the Israeli Army as a bassist in the Army Jazz ensemble, enjoying an outstanding musician status. He had studies with a variety of world-renowned musicians such as John Pattituci (a world-renowned Jazz performer,) and has studied with Michael Klinghofer (a noted soloist & teacher,) and Teddy Kling (1st bass man, Israeli Philharmonic.) He received his BFA from The City College of New York, Magna Cum Laude, in 2009. 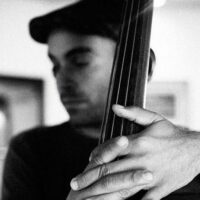