Described as a daring, authentic and versatile young conductor, Tal Samuel is fast earning a reputation as promising talent conducting from the opera pit and on concert hall stages around the world.

Recently, Tal Samuel was the first Israeli female conductor ever invited to work with Maestro Bernard Haitink and the Lucerne Festival Orchestra at his renowned masterclass at the Lucerne Festival. She was also invited to work with Maestro Michael Tilson-Thomas and the New World Symphony in Miami and with the Kritische Orchester in Berlin, where she performed with players from Berliner Philharmoniker, Staatskapelle Berlin, Sächsische Staatskapelle Dresden and other top German orchestras. In addition, Samuel was chosen among hundreds of young conductors to participate in the highly esteemed Malko Conducting Competition in Denmark and the German Conducting Award Competition in Germany. Her international accomplishments won her prestigious prizes, awards and scholarships by the America-Israel Cultural Foundation, Bruno Walter Foundation, Diana Mary Steyer Fund, Friends of the Haifa Symphony Orchestra Association, Jacobs School of Music, the Colorado Mahler Festival and the famous Bayreuth Music Festival in Germany.

During her time in the United States, Tal Samuel served as a Conducting Fellow at the Indianapolis Symphony Orchestra in Indiana, Assistant Conductor at both the Mahler Music Festival in Colorado and the Bloomington Summer Music Festival, and as a Fellow at the Cabrillo New-Music Festival in California. Since 2014, she has been working as an Assistant Conductor at the Opera and Ballet Theater in Bloomington Indiana. Some of her notable productions with the company include: Così Fan Tutte (Mozart), La Fille Du Régiment (Donizetti), La Bohème (Puccini), Dead Man Walking (Heggie), Oklahoma! (Rodgers and Hammerstein),The Nutcracker, The Sleeping Beauty, Swan Lake (Tchaikovsky) and others. From 2014-2016, Samuel also served as Music Director of the theater’s Fall Ballet subscriptions series where she conducted and recorded multiple iconic ballets such as Balanchine’s Emeralds and Divertimento, along with modern ballets such as Saudade by the Australian choreographer Sasha Janes and As Time Goes By by Twyla Tharp. 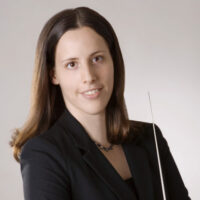