Israeli-American pianist Tali Morgulis, a “pianistic firecracker” hailed for performances “full of power and emotion,” delivers vivid, imaginative programs to an ever-growing international audience. Her love of the standard repertoire and passion for chamber music and contemporary works have led to a variety of engagements with many of the world’s leading orchestras, ensembles and soloists in the finest concert halls.

Her collaborative performances have seen her paired with such brilliant violinists as Shlomo Mintz, Vadim Gluzman, and Uri Pianka and with numerous chamber ensembles, including the Jupiter Chamber Players, the Firebird Contemporary Ensemble and the Borromeo String Quartet. A regular performer with Houston’s composer-led contemporary music group, Musiqa, her advocacy of new music has including commissions and premieres of works by composers such as Marcus Karl Maroney, Lei Liang and Lior Navok.

Ms. Morgulis began her musical studies at the age of four in her native Ukraine. When she was 15, her family immigrated to Israel, where she continued her music education, receiving her bachelor’s and master’s degrees from the Samuel Rubin Academy of Music in Tel Aviv. With support from the America-Israel Cultural Foundation, she came to the US, receiving her doctoral degree from the New England Conservatory of Music in Boston. She was fortunate to study with such wonderful musicians as Esther Balasha, Michael Boguslawsky, Wha Kyung Byun, Lev Natochenny and Patricia Zander.

Ms. Morgulis taught for three years at Fort Hays State University in Kansas and, since 2008, is Assistant Professor of Piano at the University of Houston’s Moores School of Music. Other engagements as a teacher and judge have taken her to Brazil, China, Taiwan, Israel and Croatia. She enjoys working with an eclectic group of young performers who come from South America, Asia, Eastern Europe and the US and describe her as “a great motivator who has a unique approach to teaching and an amazing insight into sound.” Tali Morgulis’ playing can be heard on her 2006 debut recording on IPA, featuring music by Rachmaninov, Lutosławski, Janáček and Shostakovich. In chamber works, she can be heard in a world premiere recording with Richard Hartshorne of the Brahms cello sonatas performed on double bass and a cello and piano recital program with Boston Symphony Orchestra cellist Mickey Katz. Her second disc of solo works, highlighting Brazilian and Argentinean composers, has been released by Delos in April 2013. 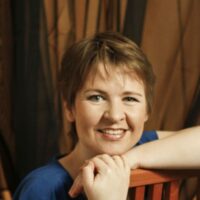