Tzuriel Barylka began his violin studies at the age of 3 at the Maale Adumim Municipal Conservatory, named after George Schaefer, with his teacher Dr. Binyamin Yofe.

At the age of 8, he moved with his family to Madrid, Spain, where he studied at the "Katarina Gurska" Conservatory. After considerable success, violinist Cecilia Berkovich (who taught him in the Conservatory's "Young String Orchestra") recommended him to h faterher, violinist Viktor Berkovich, so that he could take private lessons with him. In his last year in Madrid, he studied with the Spanish violinist Manuel Guillen.

When he returned to Israel at the age of 12, he attended the Maale Adumim Municipal Conservatory, and began his studies with Dr. Ariel Paul, who is still his teacher today. A few months after returning to Israel, Tzuriel joined the Maale Adumim Youth Symphony Orchestra and has been the orchestra's concertmaster since 2019, under the direction of Prof. Benjamin Shapira.

As a member of the Youth Symphony Orchestra, Tzuriel played in a concert at Carnegie Hall in New York, held in celebration of the 70th anniversary of the State of Israel, as part of the Orchestra's U.S. tour. Tzuriel also participated in the orchestra's tour to Russia, where he played at the Rimsky-Korsakov Conservatory in St. Petersburg, among other venues. In February 2023, Tzuriel will appear as concertmaster on a concert tour in Madrid, performing solo parts with the orchestra at Madrid's National Auditorium (Auditorio Nacional).

As a soloist, Tzuriel has appeared in festivals in Europe and in concerts in Israel, and has performed with the Orchestra as concertmaster and conductor in many concerts. In 2022, he won the concerto competition that will allow him to play as a soloist accompanied by the Maale Adumim Symphony Orchestra.

In addition to his violin studies, Tzuriel studies orchestral conducting with conductor Talia Ilan and composition with his teacher Avi Berman. 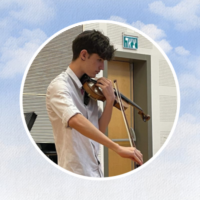