Yali Zaken, aged 18, studies piano with Professor Tomer Lev. He graduated this summer from Hassadna Conservatory, Jerusalem, where he studied since the age of seven under Lena Nemirovsky, as well as graduating from the Jerusalem Music Centre’s piano program directed by Murray Perahia.

In recent years, Yali has performed with several orchestras, and is set to perform with Lahav Shani and the Israel Philharmonic Orchestra in October 2022. He has traveled the world playing concerts and recitals, in the US, UK, Germany, Italy, Belgium, Finland and Israel, and has participated in many courses and festivals. This summer he performed at the Tanglewood music festival, where he participated in the Boston University Tanglewood Institute’s piano program. For the past four years Yali has been mentored by Murray Perahia at the Jerusalem Music Centre’s piano program. In addition, he has studied with leading artists such as Emanuel Ax, Tabea Zimmermann and others.

Yali has won first prize at several competitions, including the 2021 Pnina Salzman Competition, and the 2018 Piano Forever competition, and is a recipient of multiple AICF grants. He is also supported by the most prestigious foundations in Israel including Zefunot Tarbut, the Ronen Foundation and the Zubin Mehta Foundation. 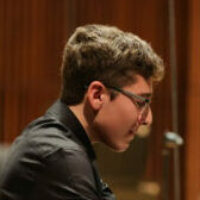