Award-winning actor, host, filmmaker and producer Yuval David, who has become acclaimed for his own work, including evocative and sometimes provocative performances on screen and stage. Each role Yuval brings to life he treats as a masterclass in using art as a fundamental agent for social change.

His profound ability to get to the heart of his characters’ humanity and relay a very real-life experience to his audience has landed him major series regular and guest starring roles in some of the most widely celebrated and talked about television series and films in recent years.

Whether he’s appearing in CBS’ hit political drama ‘Madam Secretary’ or ABC’s long-running primetime hidden camera show ‘What Would You Do?’ his appearances not only entertain with heart but explore the human experience. No role is squandered as Yuval always uses his robust platform to embed a vital element of using his art for social change, engaging his viewers and inviting them to take an active role in improving the world around them, while simultaneously empowering them, making them feel deeply appreciated.

His mission led him to host, narrate, create and curate video content across YouTube and across social media, and he currently produces almost a dozen web-series, all of which entertain, uplift and inspire viewers, following with his central mission, and regularly performs his one-person shows in theatres.

The charming, sharp-witted, captivating and funny powerhouse of energy is frequently invited to emcee and speak on behalf of countless cultural, humanitarian, philanthropic, social and political initiatives, including the Israeli Consulate in New York, most recently hosting Israel’s 70th Anniversary Celebration in Times Square, in front 30,000 at the event and millions of live viewers around the world. He has become a go-to host and narrator for short- and long-form video content and documentary features for Jewish, Israeli, LGBTQ, Arts, Cultural and Humanitarian Organizations and Initiatives, including The National LGBTQ Task Force, the Jewish National Fund (JNF USA), and Stand With Us.

As a social journalist and public speaker, sometimes this advocacy work takes on a more literal approach. He regularly travels across the United States and abroad, in recent years bringing him to the illustrious heights of Capitol Hill and to powerful major multinationals and nonprofit institutions, to speak about the significance of using art for social change. Yuval empowers people to see themselves as advocates for their communities, uniting together to support their own communities and others, and seeing these efforts as equally important.

In addition to “Madam Secretary” and “What Would You Do?” Yuval’s on-screen credits also include “The Michael J Fox Show,” “Unforgettable,” and “Days of Our Lives;” leading and supporting roles in films such as “Incipient,” “Beauty and the Beast,” “Nephilim,” “Awakening of Spring,” “You,” and “The Fifth Estate;” and lead roles in contemporary and classic theatrical works, including: Broadway in “The Game;” Off-Broadway in “Daddy Issues,” “Bunbury,” “Romeo and Juliet,” and “In The Swing.” As much as possible, Yuval enjoys performing in regional theatres across the United States and abroad. Yuval regularly does voice overs for animation, commercials, narration, documentaries, and industrials. As a TV host, Yuval specializes in human interest, environmental, travel, foodie, culinary, and lifestyle shows. He is the host of multiple shows on television and online.

As a TV host and presenter, Yuval focuses on societal, humanitarian, cultural and entertainment programming. His work is seen on network television, documentary films, web series, and regularly at live events.

Advocacy for the marginalized and underrepresented is Yuval’s driving force. He uses his creative work as a vehicle for the greater good on behalf of highly respected US and international organizations. Throughout Yuval’s advocacy work with organizations, he is brought in as a keynote speaker in several venues such as : 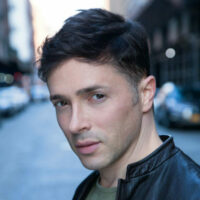