Percussionist Ziv Stein performs worldwide with various orchestras such as the West-Eastern Divan, the Verbier Festival, the Israel Philharmonic Orchestra, and the Israeli Opera.

He holds a bachelor’s degree from the Juilliard School, where he studied with Daniel Druckman and Joseph Pereira. Ziv has also studied with Alon Bor at Tel Aviv University.

As a scholarship recipient of the American-Israel Cultural Foundation, Ziv was awarded Distinction Scholarships in 2004-12 and special grants for his studies in New York. As a chamber musician, Ziv was praised by The New York Times for his performance of Stravinsky’s A Soldier’s Tale at the Juilliard Chamberfest.

Ziv has performed with professional contemporary music ensembles in Israel, and gives solo performances, sometimes accompanied by professional ensembles, in venues in Tel Aviv, Jerusalem, and Verbier, Switzerland as part of the Verbier Festival.

Ziv has played with orchestras on tours all over the world, including France, Germany, Switzerland, Spain, the United States, Canada, Argentina, Ecuador, Venezuela, Brazil, Colombia, and the Dominican Republic. 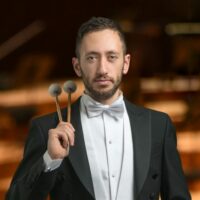